TheRealKiwi schrieb:
The 550 BE is an AM3 CPU and not allowed for the Memory DDR2 Stage, only for AMD DDR2.
Rules: "Only use processors using socket AM2, AM2+ socket"
I've already asked https://community.hwbot.org/topic/2...-memory-thread/?do=findComment&comment=595716
All the Guys use the 940 BE, as i know 940BE and 920NonBE are the only "new Gen Deneb" CPUs with AM2-only and DDR2-only Support.
Unfortunately my efficiency on SuperPi is not as good as the other, with~3,9GHz i cant do <18m15s, there is much too learn for me, but luckily i can gain high frequency

But with this CPU, maybe you can do an AMD DDR2 Sub x265, with an 4GHz+ Sub, we should be Rank 2 at this moment.
Zum Vergrößern anklicken....

I noticed that HWBot tells me it is an am3 cpu, but actually it is am2+ and am3 cpu.

Sparksnl schrieb:
I noticed that HWBot tells me it is an am3 cpu, but actually it is am2+ and am3 cpu.

I am using it on am2 (dfi board), not am3. I can not imagine this van not be used.
Zum Vergrößern anklicken....

thats why i asked there, i think the rule should be renamed to "CPU must be nativ AM2/AM2+ CPU"

I asked Albrecht just to be sure (direct app to mobile).
I think I would post it anyway… If they don’t let me use it it means tge 9xx architecture is off records as well.

A Phenom II X4 940BE will arrive today. After the discussion on HWBot they better prepare for an all out session to be still number 1 in the DDR2 memory competition part. Because I will be using my Single stage (-60C).

Getting there on air…that was unexpected. I put too much time in finetuning 😁. 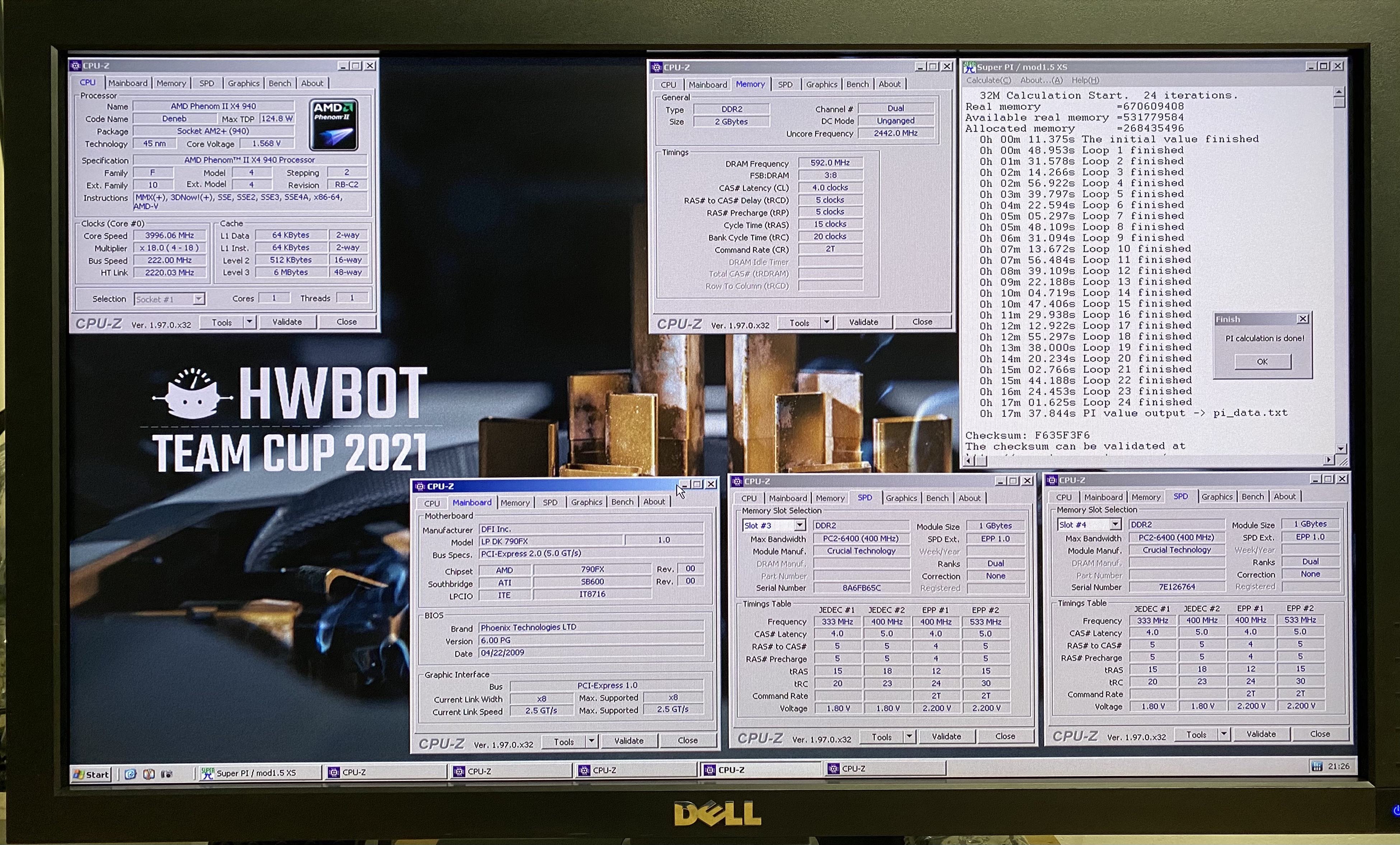 very nice, have you "finetuning tipps"? 😅 your sub is better than mine with 90MHz lower CPU, thats very nice. How much voltage you need for CL4?
i calculate it manually, should be 17m39s524ms in summary for Team, thats place #1 (very close) !

I needed 2.5v for cl4. It would be nice if you could loose some seconds.
I ran Win xp in msconfig debug mode. And I set 640MB memory in msconfig without swapfile to be able to clean memory for pi, altough that did not seem to work. I closed explorer in taskmanager.
Oh and I booted with fsb 200MHz and set 222 MHz with setfsb because I could not boot it. That was after I used cpu tweaker v1.5 to raise NB voltage to 1.30v 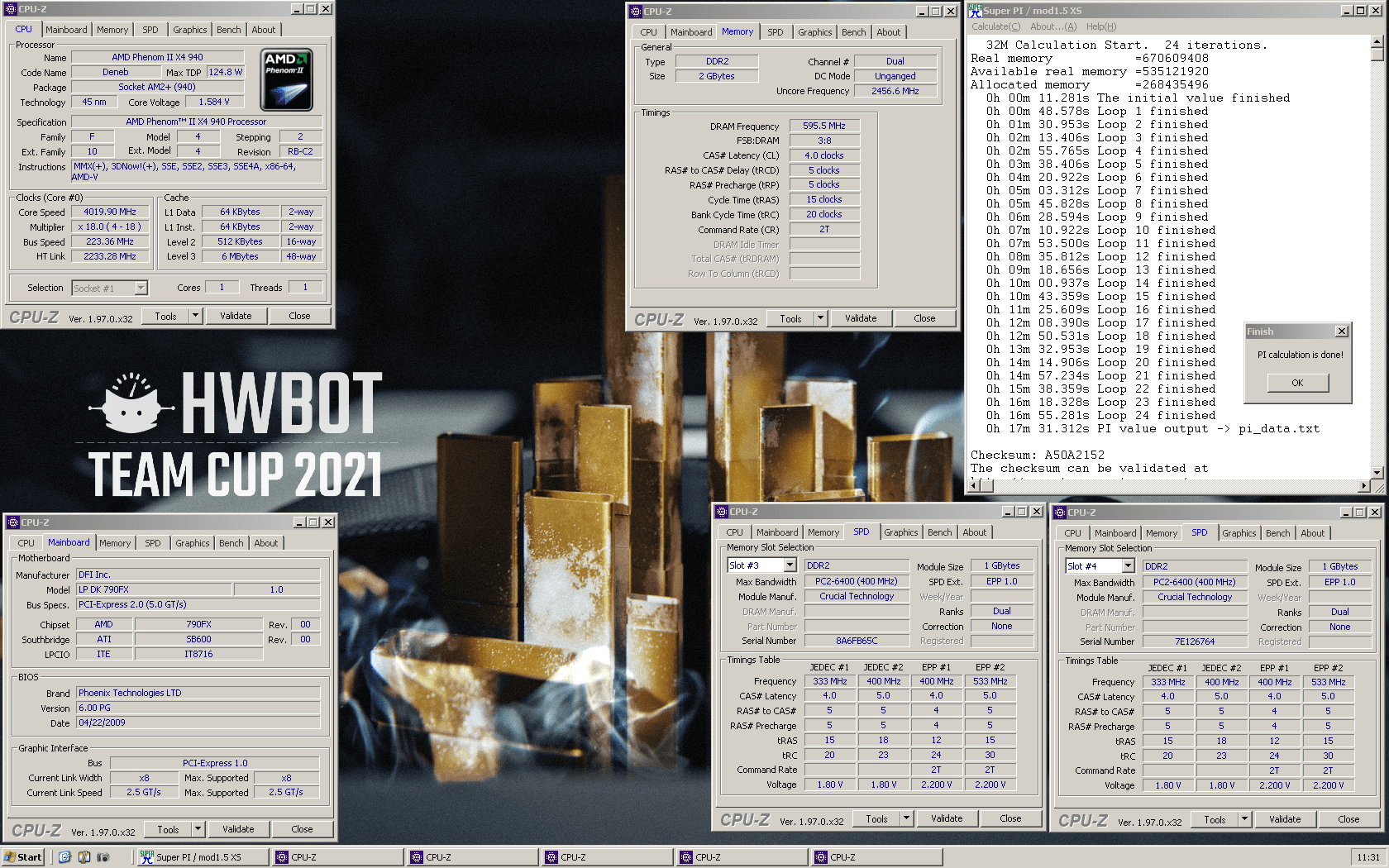 Edit: Decided to upload it.

I must say that it looks like it is an easy OC generation. This were my first runs ever. 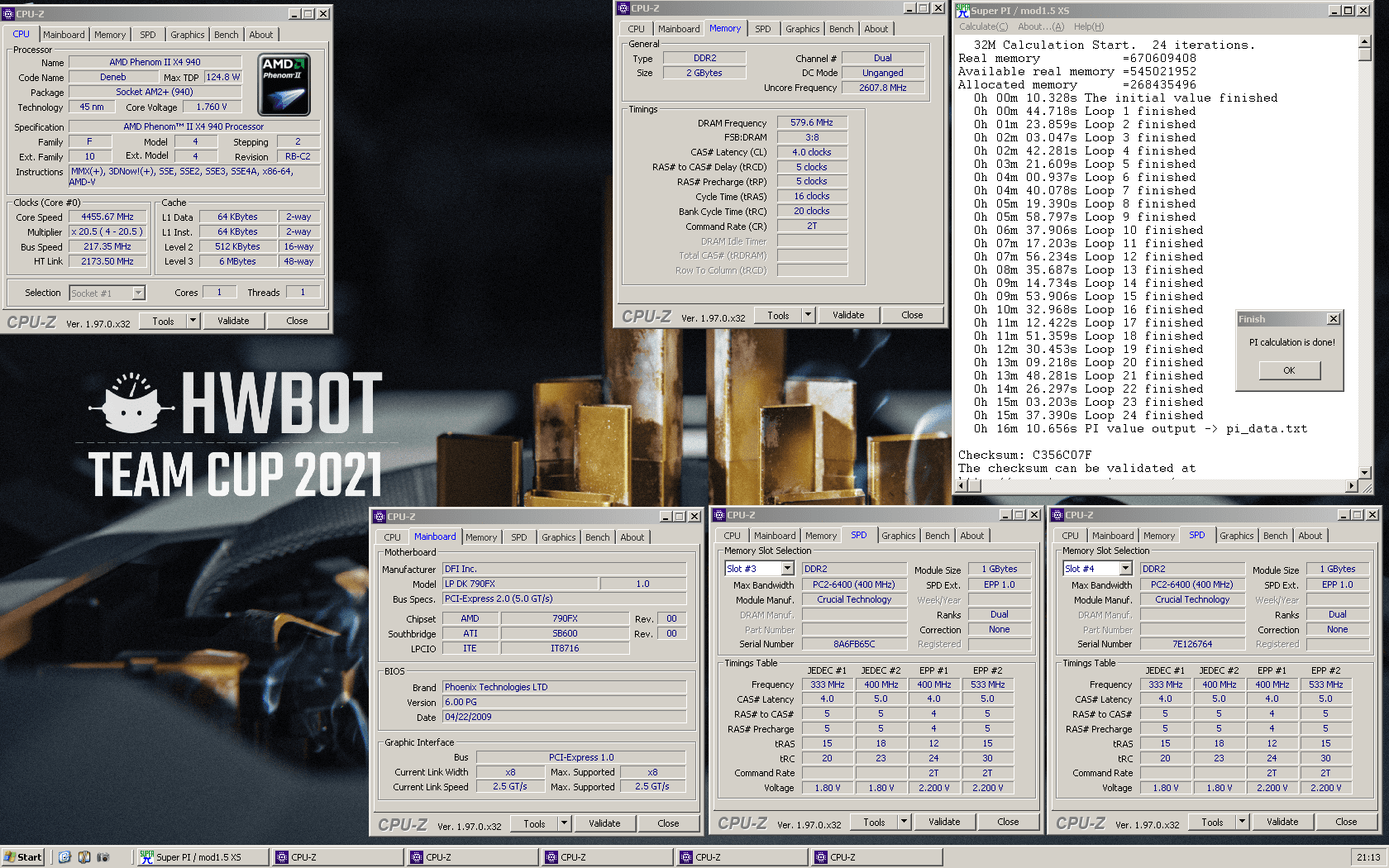 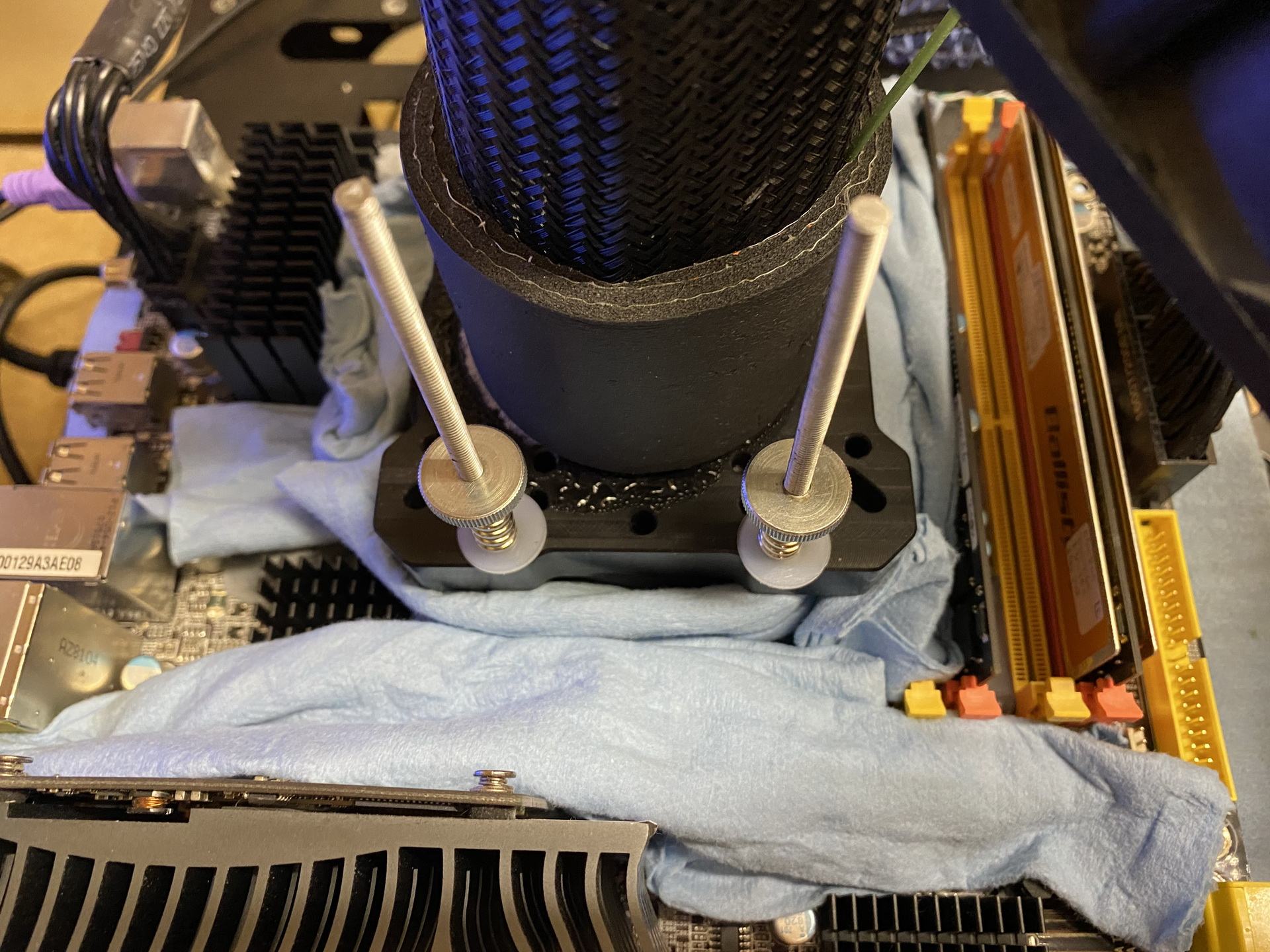 Edit: Is there a max bus speed for these cpu's?

Sparksnl schrieb:
Edit: Is there a max bus speed for these cpu's?
Zum Vergrößern anklicken....

I never OCed my AM3+ CPU via bus speed, so no clue. I guess there is not a max bus speed : The Sempron 145 @ 6222MHzscores getScoreFormatted in the SuperPi - 32M benchmark. I.nfraR.edranks #null worldwide and #2 in the hardware class. Find out more at HWBOT.

Maybe not on cold. I saw more scores for the Teamcup which are limited.
T

At first, i've no huge personal experience about different AM2/AM3 CPU generation combined with 700/800/900er Chipsets, i only have that 790FX one and mostly AM2 CPUs but now what i know or think, maybe it helps you:
- also i have an Sempron (not sure 140 or 145) but this will not recognized on my 790FX M4A79 Deluxe although on compatibly list, only black screen, but only quick tested one BIOS (but works on other boards).
- my Athlon II X2 270 Sub (Regor Cores) is about 280 BusSpeed, Sargas should be same architecture/core
- As you said other Semprons about 260-270 limited too on ambient for this TeamCup (by temps or BusSpeed?), but as i see mostly GeForce/nForce Chipsets, all Subs with more than 260MHz are with Gigabyte Boards, except these twos The Sempron 145 @ 3986MHzscores getScoreFormatted in the HWBOT x265 Benchmark - 1080p benchmark. Bullshooterranks #77 worldwide and #20 in the hardware class. Find out more at HWBOT. The Sempron 145 @ 4362MHzscores getScoreFormatted in the HWBOT x265 Benchmark - 1080p benchmark. FoX_UAranks #69 worldwide and #14 in the hardware class. Find out more at HWBOT.

hwbot.org
- Infrareds Sub was with 890 Chipset which was designed for AM3 CPUs and DDR3

What i want to say, maybe its something about a specific combination of CPU / Board-Brand and Modell / Chipset / BIOS-Version, 700er Chipsets released before Sargas CPUs and there are differents
790FXs there are with SB700 or SB600, the early Boards had the SB600 as your DFI from the 940BE Sub (and in your case an different LPCIO/ITE Chip than most others, dont know if this matters), i dont know if there are different revisions of the 790fx chipset. have your Board ACC? But i think this was an SB7xx-only thing.
as far as I can remember about the older tests with locked CPUs, me helped on little pump up of NB / CPUNB and HT / SB voltages for higher BusSpeed, respectively some of this ones.

I figured it could be a compatibility issue. The bios I use is the latest beta bios for x2 550’s. If that does not fully support it, I guess none will. I see those 2 scores are not sub zero as well. It is typical since I seem to hit a wall.
I am not sure what ACC is. What is it?
About the NB and HT voltage, I am allready using a little more. From what I noticed my NB is not the problem.

Now I think of it, I have some more motherboards. I never installed an OS on them, but they work. I have one Asus Crosshair II Formula (nv 780 chipset) and a Gigabyte GA-MA780G-UD3H. I could do some post testing on them.

Edit: I just looked at the Gigabyte cpu support list and the Asus cpu support list, they seem to fully support it.
I just wonder which of the 2 would be best to use. I don’t have much time and have an OS install to do.
Zuletzt bearbeitet: 29.09.2021

Edit: Is there a max bus speed for these cpu's?
Zum Vergrößern anklicken....

Just to make sure that this is not the issue: On AM3/AM3+ CPU-NB-clock must not be higher than HT-clock! HT hast to be at least the same clock as CPU-NB (or higher). Otherwise the system won't boot.

If you already had this in mind then there is another issue. But maybe this is something new for you...

Sparksnl schrieb:
I am not sure what ACC is. What is it?
Zum Vergrößern anklicken....

ACC is Advanced Clock Calibration. With this feature you may be able unlock Cores and/or Cache for your CPU. Sometimes you can turn an X3 to an X4 and so on.

This does not work every time. With the boards and CPUs I got directly from AMD and motherboard-makers back in the days I never had success. Maybe this was because of early samples (cores are really damaged and not just disabled for product portfolio reasons) and/or yield was low(er) in the beginning. I don't know but I could never enable cores from my CPUs directly from AMD.

ACC is a BIOS-Feature of certain boards with SB750. And back in the days there where rumors that ACC can result in a higher overclock (up to 300 MHz). But even when this was the case in some special/rare circumstances it never was that much in most cases. I did some testings with different motherboards and it was clear that ACC didn't do magical things - it's more important to use boards with proper VRM.

About the max for HTT max clocks: While OC my 940BE I noticed it the hard way. So after that I knew. So no issue here.
Thanks for explaining ACC, I did not know it was called ACC. I did read it was not for SB700 and I don’t have the feature on my DFI. I never tested it on any other board and I wonder if my CHF5 Formula z has it.
That graphic is interesting. Looking at it my CHFII is the board to test next as it comes with a great VRM.

nice to hear, how you solved the 300MHz wall?

I shifted some settings (HT etc).
But I am afraid it ends here. On no SATA port my Windows XP install will see my SATA drive. With no settings enabled or on AUTO. I don't have much time to solve it.

Edit: I loaded a driver disk for an AHCI SATA driver, this seems to be working. It was a last resort action from my FDD 1.44MB disk... At least the Win XP install actually started.
Edit 2: Too soon.... It stopped again, it can not read the files from my floppy. I am now trying to integrate them on a Win XP install CD with NLite.
Edit 3: I give up, no install is possible on this board for XP. At least not with AHCI enabled. So that makes it useless fir me to try. The CD I burned did not read on my IDE CD/DVD drive. nor did it on my USB DVD drive.
Edit 4: In IDE mode no disk as well: That means, board for sale...
Zuletzt bearbeitet: 29.09.2021
Anmelden, um zu antworten.
Teilen:
Facebook Twitter Reddit WhatsApp E-Mail Teilen Link
Oben Unten